I picked up this leather bound, onion skin paper version of the first two Books of the Discourses, Enchiridion, and Fragments.

It was waiting for me in the mail when I got back home.

Books 1 and 2, Enchiridion, and Fragments.

I apologize for the delay, but my own period of exile had come to an end.   I’m back home in the heart of Appalachia,  truly a mountain Stoic once more.

I think this is one of my favorite sections of your Letters thus far.  It addresses several interesting topics, first being the importance of practice and study.

You brought up a point which is one I noted several months ago, that sometimes the arguments of the Old Stoa are … less than convincing.  Specifically, I’m thinking of some of Zeno’s arguments as reported by other sources.  It reaffirmed that opinion of mine, to see that you too shared this opinion.

“Our master Zeno uses a syllogism like this: “No evil is glorious; but death is glorious; therefore death is no evil.” A cure, Zeno! I have been freed from fear; henceforth I shall not hesitate to bare my neck on the scaffold. Will you not utter sterner words instead of rousing a dying man to laughter?”

It’s important to note, that although this particular argument might not be convincing, as you note his interlocutor successfully refutes by turning it about, it doesn’t mean that the idea is wrong or untrue.

There are other arguments that Zeno makes, that despite his argument being unconvincing seems to me to have a true conclusion.

The next part that stands out to me is the explanation of how the manner in which we treat an indifferent is not itself indifferent.

This careful division, of the context in which virtuous choice occurs, and the choice itself is poignant.

A reminder, then that each intention contains the possibility for virtue.

“Everything, if you add virtue, assumes a glory which it did not possess before.”

This is, following, is an important note.  What trouble might arise if we put off this practice, suddenly to find ourselves face-to-face with death without having done the training?

“Therefore, although death is something indifferent, it is nevertheless not a thing which we can easily ignore. The soul must be hardened by long practice, so that it may learn to endure the sight and the approach of death.” 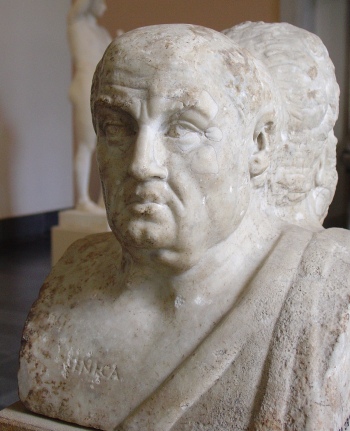 So, the close of this week marks the half-way point for the Seneca’s Letters Reading Program.  That’s been six-months of daily (during the week) readings.  I’m thinking of taking some additional time in the second six-month period to focus on Marcus.

I’ll work up a reading plan, which will probably use one or two different translations of Meditations coupled with Pierre Hadot’s The Inner Citadel.  Expect to see this project in the next couple of weeks.

Anyhoo, thanks for following along.  I’ve found the more in depth study of Seneca useful, even if we’re often in disagreement.  I’ve found a new appreciation for the work, however.

I’m wondering if there’s a nuance that I’ve missed before now, between Fortune and Fate.  This polemic against Fortune seems as suited to a Cynic discourse against Fate.  I suppose the snide among us might say, “There is a difference, you can tell, you know, because of the spelling.”

“[G]ird yourself about with philosophy, an impregnable wall. Though it be assaulted by many engines, Fortune can find no passage into it.”

We have the (later dubbed) amor fati component of the Stoic worldview, and if Fortune and Fate are used interchangeably, this kind of charge seems to be a contradiction.

Instead, if we look at it as Fortune being the fickle nature of externals in relation to ourselves, and Fate being the divine order, that apparent contradiction vanishes.

“The soul stands on unassailable ground, if it has abandoned external things; it is independent in its own fortress; and every weapon that is hurled falls short of the mark.”

This seems to be the case, then.  The Stoic instructed by you, Seneca, accepts whatever Fate brings, and attempts to set aside the things on which fickle Fortune preys.

Fate versus Fortune will be interested fodder for the day.