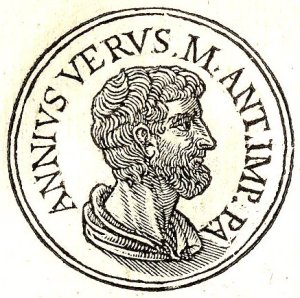 In Chapter 16 Marcus enters into the longest discussion of Book I yet, and shows us his father.  I’ve recently been reading about Epictetus’ sense of Roles which differ significantly from Cicero’s account, the more prevalent one.  In reading Marcus’ thoughts on his father, it seems to of two types of observations.  The first, being how the man executed his various roles: carefully, controlled, effectively, and with fairness.  The second being the manner in which the man carried on his daily life: a seeming paragon of Roman decorum.

When Stoicism ceased to be a Greek-speaking realm’s pheromone, and migrate to Rome, it underwent some changes.  Hellenistic philosophy sometimes had hard edges, that cut deeply into the lives of those that handled it.  In Rome, some of those edges were knocked down.  The Cynic’s παρρησία, while still tolerated even in the watered down Roman manner, was pushed aside for the decorum.  Marcus’ discussion of his father shows this, in the focus on his roles and bearing while executing his duties as a Roman.

It is a great loss for those of us studying the Stoics not much of the early Hellenistic Stoics remains.  I still hold out my hopes for a “Stoic Herculaneum” of sorts.

The last note, about Maximus and his sickbed, make me wonder what Marcus might remember of his own father.  Back in Chapter 2, you may remember that he mentions “of what I remember” and stories he’s heard.  A quick internet search tells me that Marcus would have been about three years of age when his father died.  Not everyone has memories of that time of their life.  I have a couple, and one even older, but that’s pretty uncommon.  I wonder if Marcus’ only memory of his father is of the man’s death?  That would be something.