When discussing Stoic practice, we often are at point of reconstruction.  We have several words for these types of actions (meletáō) meaning contemplation or meditation, ἀσκέω (askeō) meaning practice or training, and more.  We have lists from Philo of Alexandria and others as to the types of training, and they are expounded upon by Musonius and Epictetus.  Hadot and Buzaré have written in some depth about these, and I have also contributed some work on new-old practices as well:

In that vein, I’ve been working on another tool to aid to the Stoic Toolkit: 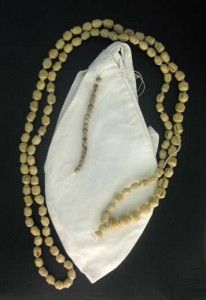 I’ve had experience using several prayer/meditation aids in the past from several traditions, some I’ve studied as an adult and one was a core practice of my religious upbringing.  It is interesting how it seems we often circle back to core parts of our early indoctrination, even if other core parts are set aside.  I’ve had the opportunity to sit as a neutral observer in related services and religious functions, and I’m always struck by how far away my path has taken me from some of those concepts and beliefs, and how close others still are.

To that point, a few years ago I repurposed japa prayer beads as counters for a Stoic meditation of keeping certain precepts and phrases πρόχειρον (procheiron or ready to hand).

If you’re not familiar with japa beads or mala, they are a string of typically 108 beads traditionally made of rudraksha seeds or other materials and used in Hinduism, Jainism, Sikhism, Buddhism and Shintō as a meditation or prayer aid. I kept mine in a pouch into which I inserted my hand, and used it as a counter as I repeated certain phrases, like my personal Stoic Μνήμη (memory exercise or mnḗmē).

Regarding earthly things:
Nothing unexpected has happened,
Nothing evil has occurred, and
Nothing eternal has been lost.

However, even though the intent was similar, it felt a little strange to use a tool that’s decidedly formalized like this from another tradition wholesale. It felt a little disrespectful, and just “not quite right.” For instance, I don’t think I would have used a rosary this way.

It did seem helpful to me, however; and I have recently taken it back up. I previously came up with a counting method using the knuckles of my fingers. I would use my thumb of my right hand, and begin at the large middle knuckle for “1,” move to the small end knuckle for “2,” and the end of the finger for “3.” Once I had completed all of the knuckles of my fingers of my right hand in this fashion, being a count of 12, I would mark one knuckle of my left hand in the same fashion.

In this way, I would have a count of 144 with one full “round” of both hands, each knuckle of the left hand being a 12-count. This was good when I didn’t have a counter or a tool, and since it was a motor-function, and not a cognitive one per se, I could do it without thinking and focus on my meditation practice.  It is nice to be able to do this with a tool, and you can do it practically anywhere and almost totally incognito.

However, I liked having the tool, as well.

Recently, I discovered a tool used to pass the time in Greece and Cyprus called κομπολόι (kompoloi). These are used in a “quiet” and “loud” fashion as a sort of “fidget-device” and are really devoid of any current meditative or religious practice.

Being a cultural practice of the inheritor of the culture from which our School originated, it feels “closer to home” as it were. I’ve been doing some reading, and it’s likely that japa and κομπολόι actually have a common ancestor tradition, which is interesting.

So, I have ordered a κομπολόι, with the intent of restarting my repetitive Stoic mantra or μνήμη practice.  I am not quite sure if I will make use of either method, as it’s not quite conducive to the “counting” function that I’m doing.  I may use them more like the japa beads above.  I thought I would share this, as I haven’t seen many other using a similar meditation or spiritual exercise.

Neither 144, 108, or any of the variant numbers of κομπολόι have any particular meaning for Stoics that I can think of, and I do have a mind towards symbolism. So, I wish that we could devise a meaning full number-symbol for this use.  If you have a similar practice, or use a similar set of tools, I’d be interested in learning about it. Feel free to discuss in the comments.  If you have a suggestion for a number-symbol for the beads for a Stoic meditation practice, I am 100% open to hearing it.